The primary role of public administration is to maximize the value of every dime spent to achieve the high goal of preserving, developing, and enhancing human lives in the context of intergenerational continuity.

However, in third-world countries, there is a serious “missing middle” between the high goal of nation-building and how the government and government-related agencies spend the peoples’ money.

The typical third-world approach is as follows:

In a compressed timeframe, the government ministries and stakeholders, comprised mainly of their agencies, will develop an ostensibly inclusive plan that comes with the budget. Note that the budget must be spent within the stipulated period. Otherwise, it will be rolled up and probably cut for the next period. This, in the absence of proper check and balance structures, incentivizes the public servants to speed to spend (usually in the last quarter of the budget period).

Again, there is no check and balance, and lavish expenditures attributed to the claimed outcomes, such as numerous events or outreach programs, are very vaguely associated with the visions and missions that only read well (on the paper or the wall).

This “speed-to-spend” mentality begotten by the “input-output” paradigm, omnipresent in third-world countries, procreates malfeasance, numerous leakages, corruption, alongside myopia and inconsistency in public policy-making and therefore hurts the lives of the rakyat directly through low industrial development and poor quality of life.

A marked contrast to this stands the Scandinavian or Nordic model of robust public administration.

In these countries, the highest degree of trust in the government’s ability to maximize the societal benefits for every dime spent is at the backbone of citizens’ willingness to pay higher taxes. As a result, the citizenry enjoys high-quality free public services, generous social welfare programs, guaranteed pension payments and other societal benefits.

One of the secret ingredients to this success is the broad deployment of the theory of change (ToC), also known as the input-output-outcome-impact (IOOI) model, as the cornerstone of thoughtful planning, effective implementation, sound evaluation, radical transparency, and fruitful inter-ministry and inter-agency collaboration in public administration.

The IOOI framework (figure below) is straightforward and powerful. It represents a diagrammatical depiction of the causal pathway between four levels of measurement: input, output, outcome, and impact. 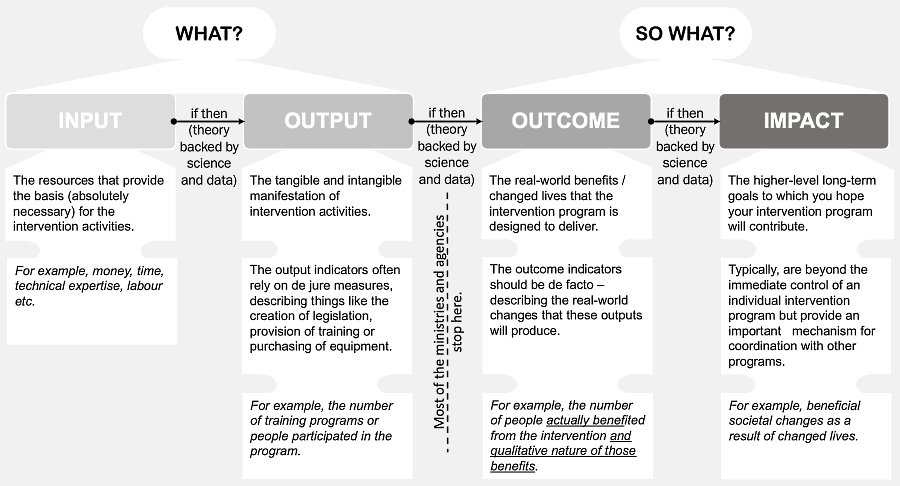 The idea is to start with the high-end long-term goal–usually those beneficial societal changes or transformations we want to see–and then work backwards to identify necessary preconditions. This will lead to multiple levels of measurement linked through logical relationships: if we commit A inputs to produce B outputs, then we will have C outcomes, which then should ultimately contribute to D impacts.

Now, why is this framework called the “Theory of Change”? Because by assembling it, you are essentially building a “theory” or a conceptual model explaining why the societal change should occur. And, importantly, each of those “if-then” between the subsequent outcomes and preconditions must be backed by a sound rationale and scientific data like a line running through and tying it all together.

So at the planning stage, this is the way to ensure that science and data drive policy-making.

Furthermore, this is the way to set crystal clear and realistic key performance indicators to guide implementation, evaluation, continuous reflection, learning and adaptation.

When progress along the IOOI pathway is continuously disclosed to the public, this is also the way to build public trust and cooperation.

Also, there is no way to ensure complementarity, cohesion and continuity between individual intervention programs and plans other than through science and data-backed if-then links.

And above all, this is the only way to finally start breaching the wide gap between interventions and real societal impacts in third-world countries and closing the door for a “speed-to-spend” mentality among public administration and civil servants.

Such countries as Holland, Netherlands, Finland, Norway widely practice IOOI methodology in their public administration to optimize people’s money for genuine nation-building. Therefore, it comes as no surprise that, for example, the Norway Sovereign Wealth fund is often cited for its exemplary performance, high level of accountability, radical transparency, investment merit, high returns and savings for the citizenry.

The New Zealand government introducing the “well-being budget” in 2019 is another example of policy innovation inspired by the IOOI paradigm. The well-being budget framework encompasses 60 indicators of quality of life beyond economic indicators, which serve as concrete measures of outcome and impact. And, according to Grant Robertson, New Zealand’s Minister of Finance, never before had this level of evidence and statistical analysis served as the foundation for a budget not only in New Zealand but worldwide.

Notably, the IOOI model is also widely practiced in the corporate world to outpace competition that nowadays is just one mouse-click or even finger-tap away. There the resources are scarce, and every jota is to maximize the value to customers.

Meanwhile, third-world public administration mentality says “money is there to spend frivolously” while customers (citizens) have nowhere to go. However, the brain drain phenomenon that plagues and continues destroying third-world economies suggests otherwise.

Therefore, there is a fierce urgency of now to put the IOOI paradigm in practice in public administration. There is absolutely no time to protract instilling the mechanisms of prudence and accountability when Covid-19 has pushed our development to at least five years back. And now is the time to ensure that each dime borrowed contributes to beneficial societal changes and growth going beyond shuffling the GDP numbers for generations to come.

With that, it is a great hope that Twelfth Malaysia Plan incorporated the IOOI model, and if not, it must be introduced at least at the review phase given the fact that, according to authorities, the plan is fluid and dynamic and subject to change as we go along. 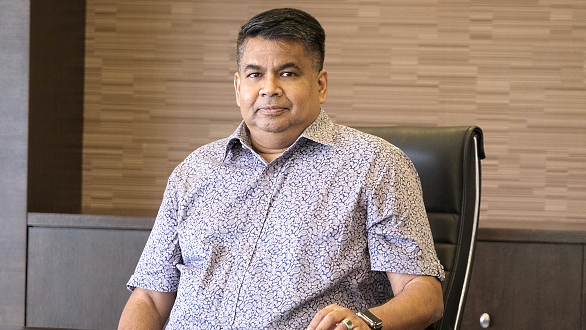 Remember the Squid Game!
1 mth ago Top WHO, US scientists say Omicron no worse than other virus variants
20 h ago A sea of political banners in Sarawak polls
22 h ago Finally, the months-long liquor controversy comes to a rest
22 h ago ‘Highly unlikely’ existing vaccines will fail against Omicron: WHO
22 h ago Australia joins US diplomatic boycott of Beijing Olympics
23 h ago