Font
The tiger in us

When I was a little boy (that would mean a very long time ago), I was told about the prowess of Tiger Jeet Singh who migrated from Punjab to Canada and became a professional wrestler.

Many years later, as an adult I came to know of American golfer Tiger Woods. I never had the honor of watching him rule the greens, what more meet the man himself in person.

One thing I cannot understand is how sex acts or performances are given, by some people, the name “tiger shows”. But let’s not go there!

Instead, let’s talk about tiger. The real animal tiger.

The tiger is a beautiful animal – dark vertical stripes on orange fur and a write underside.

It is a predator but “charismatic”. We know, as Wikipedia puts it, that the tiger has featured prominently in ancient mythology and folklore of cultures throughout its historical range.

And it continues to be depicted in modern films and literature, appearing on many flags and coats of arms, as mascots of sports teams as well as symbols and logos of companies and corporations (here in Malaysia, a particular banking giant comes to mind).

The tiger is the national animal of India, Bangladesh,South Korea, and of course our very own Malaysia.

In the Malaysian coat of arms, the shield is guarded by two rampant tigers as supporters.

Such is the greatness of the tigers that they are entrusted with upholding of the nation. Symbolically.

Yes, we humans love and are proud to be associated with the magnificent tigers. Yet we humans are guilty for the tigers to be facing near extinction in the wild, and according to reports they could become extinct over the next 20 years. That is not too long a time from now!

Overhunting, destruction and fragmentation of habitat are the main causes for the rapid decline in the number of tigers. There are many more reasons, and we are guilty of it all.

Here the Malayan tigers are fast disappearing. Sad but true.

Yes, there are conservation programs to save the tigers, here in Malaysia and elsewhere.

We pray they work. Lots of time there are lots of talk only. Efforts to save the tigers are carried out only by small groups of truly dedicated people. For the rest of us, including yours truly, it’s talk with little or no action!

Perhaps he has studied Chinese zodiac or have links with experts on Chinese zodiac. Whatever it is, he has come with the piece which is “enlightening”, to say the very least.

I find it very interesting. Never mind whether I’m into zodiac – regardless Chinese or Western.

Politicians would find this “revelation” encouraging and depressing, depending on which side of the political divide they are on. I think you know what I mean. What more it is also said the new year is one of risk taking and adventure.

I read that to mean that people are willing to take risk and go on wild adventures to make the big changes envisaged. After all, in the new year it is said people are finding enthusiasm again, all fired up with generosity at an all-time high and social progress “feels possible again”.

In short, we want a nation which is good and happy for all of us. A healthy and prosperous nation for everybody regardless of religion, race and ethnicity. That would mean righting all things we perceive wrong.

According to the Chinese belief, people born in the Year of the Tiger are known for their courage and ambition, as Tigers are extremely competitive people,. All great qualities to right the wrongs.

However, we cannot leave such a task to the Tigers only. All of us born in the years of other zodiac signs must also be up to par and join in.

But, righting the wrong is not easy. It has never been, what more under current situation when health and economy have taken a battering since 2020.

Yes, COVID-19 is showing signs of slowing down, but it has not gone away completely. It is still here!

The economy is trying to pick up, but is still in bad shape and struggling to get back on its feet.

We are hearing accusations of corruption committed by people in high places. Counter-action is not much to be proud of thus far. In fact, there are more questions than answers!

Politically, the nation is unstable. The government is not as strong as we wanted it to be. That is stopping short of accusing it to be weak.

While we are not at each other’s throat (we thank God for it if one believes in God), race relation could be better. Religion and racial issues continue to be fanned by politicians and non-politicians alike to gain support easily.

To make things right is no mean feat when there’s a group wanting to continue to be master with all the perks, rewards and benefits that come with it.

I’m talking about the “Ketuanan Melayu” syndrome which has prompted push back from the other communities with their own race-based formulas.

It is but a vicious cycle. Tic for tac.

There are surely the wrongs, right? Can we rid the wrongs then? Honestly I do not know.

Will the “forecast” that the Year of the Tiger is about “big changes” turn into a reality? Again I do not know. Is there hope? Of course, there’s always hope for better things, better nation, and better world. But hope alone is not enough! 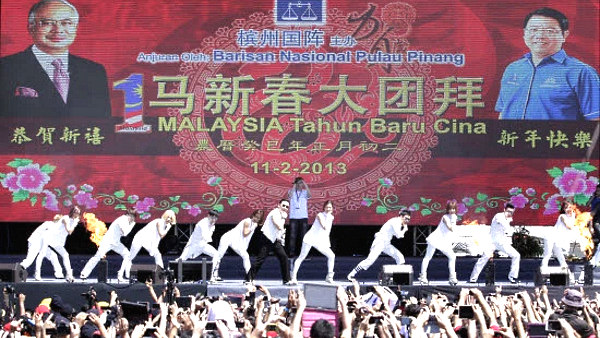 I am not amused
2 mth ago Lion dance with Indian drums, only in Malaysia to deliver festive cheers
3 mth ago Here comes the Tiger
4 mth ago Parents, watch out for a spike in HFMD cases
23 h ago