History shows that Malaysia has never been short of policies related to agriculture or food. Ironically, policy abundance has proven insufficient to ensure food security.

What were the objectives of past policies?

The first to the Third National Agricultural Policy spanning the 1980s to 2010 focused on addressing rural poverty and bridging the economic gap between small-scale and large-scale farmers, increasing sustainable food production and competitiveness.

According to the Economic Planning Unit under the Prime Minister’s department, the National Agrofood Policy 2011-2020 (NAP 1.0) was supposed to address food security and safety to ensure availability, affordability and accessibility, ensure the competitiveness and sustainability of the agrofood industry, and increase the income level of agropreneurs.

In general, investigating Malaysia’s current status points to the failure of a decade-worth of NAP 1.0 in key dimensions of food security.

Where are we now?

A closer look into a well-known global index on food security informs us of Malaysia’s worrying food security status despite mouthful policy objectives that seemingly encapsulate everything. Global geopolitical events of the last two years also revealed the substance of these policies resulting in Malaysia’s food insecurities.

Looking at historical figures for Malaysia’s scores on the four dimensions of food security used in the Global Food Security Index (GFSI) 2021 – Affordability, Availability, Quality & Safety and Natural Resources & Resilience (Figure 1) – it may seem that our relative ranking or score in certain dimensions such as affordability and quality and safety aren’t that bad, especially when comparing with other countries that are performing poorly as well.

However, we have to investigate deeper, to see if these scores and relative comparisons adequately represent the actual situation on the ground. Table 1 below summarises the GFSI-2020 indicators for which we observe a negative difference with the high-performing countries in the Asia-Pacific region as a group. As we can see, from the first glance, although Malaysia appears at par with the top-performing countries on the affordability dimension (as shown in Figure 1 earlier), comparing Malaysia’s score with the median score for high-performing countries in GFSI 2020 and 2021 reveals that the country’s market access and agricultural financial services are significantly lagging.

Malaysia scored low on the availability of diversified financial products for all farmers (including small-holders) and access to market data and mobile banking which has been in a declining trend since 2016.

Additionally, and as evidently shown, the availability dimension tops the list of problematic areas for Malaysia. The remarkable difference is Malaysia’s low score on the indicator of food security and access policy commitments in GFSI 2020.

A closer examination reveals that this indicator includes assessing whether the country’s government has made food security a focus area and priority and has a clear food security strategy.

Notably, for years, from 2012 to 2020, Malaysia has been receiving a zero score on this measure from food security experts.

For the same period, from 2012 to date, the experts have also been highly sceptical of the Malaysian government’s ability to be held responsible and accountable for whether it has invested in and taken a coordinated approach to achieve food security.

In GFSI 2021 Malaysia has finally received a score of 50 for food security and access policy commitment mainly due to the formation of a National Food Security Council. However, further analysis reveals this event did not change Malaysia’s food security equation.

Further examination into the current (successor) policy (NAP 2.0) clearly points to the underwhelming performance of its predecessor, NAP 1.0.

As shown in Figure 2A, Malaysia experienced marginal improvements or even reductions in the self-sufficiency level (SSL) of major food items between 2010 to 2020. Most food items decreased (in red), while only three recorded growths (in black), which are all very marginal. Notably, rice SSL is below its 70% SSL target in NAP 1.0, and some contractions in food item SSL appear contrary to its growth demand – pointing to higher dependency on imports.

Between 2010 to 2020 Malaysia also experienced a declining share of agriculture GDP contribution (Figure 2B), indicating a higher focus on other sectors and/or reduced reliance on agriculture for the Malaysian economy.

Note that the NAP 2.0 document shows the 2020 forecast figure, while DOSM reported that the contribution of the agriculture sector to Malaysia’s GDP in 2020 is 7.4% – slightly higher than the forecast. Of course, we recognise that Malaysia may experience further declined agriculture GDP contribution due to logistics and export restriction measures during the lockdown periods.

Be that as it may, in the background of marginal growth/contraction of SSL for major food items, increasing food demand can only be met by increasing imports. Especially when in presence of a declining share of agricultural GDP contribution the reduced SSL reflects decreasing local production capacities for major food items.

Fair enough, the NAP 2.0 reported an increasing trade deficit between 2010 to 2020, and a widening production-consumption gap (Figure 2C).

Indeed, the policy document reported that the major agrofood consumption rate is more than the growth rate of the production, with the only exception of rice which saw a slightly declining local demand, and that consumption would likely surpass local production capacities should the trend continue.

These indicate increasing reliance on imports to fulfil local demand and point to increased reliance on external supply chains to support the domestic needs of the agrofood sector.

As a case study on past policy target inconsistencies, we can look into rice’s SSL targets over the past many decades.

Needless to say, the low SSL figure is a highly worrying food insecurity situation as rice is a staple food.

The above concerning dynamics are not surprising when confronted with numbers revealing how starting from 1960 to the present the industrial commodities and cash crops with their economic appeal gradually but massively overtook land mass in Malaysia limiting the production of food crops.

However, the arable land, defined by the United Nations Food and Agriculture Organisation (FAO) as land currently used, or potentially capable of being used, to grow seasonal food crops, as per cent of total land area while already being many times lower than our regional peers in 1980s (see Figure 3 and note the difference in graphs scale) has further shrunk to meagre 2.5% in 2018. 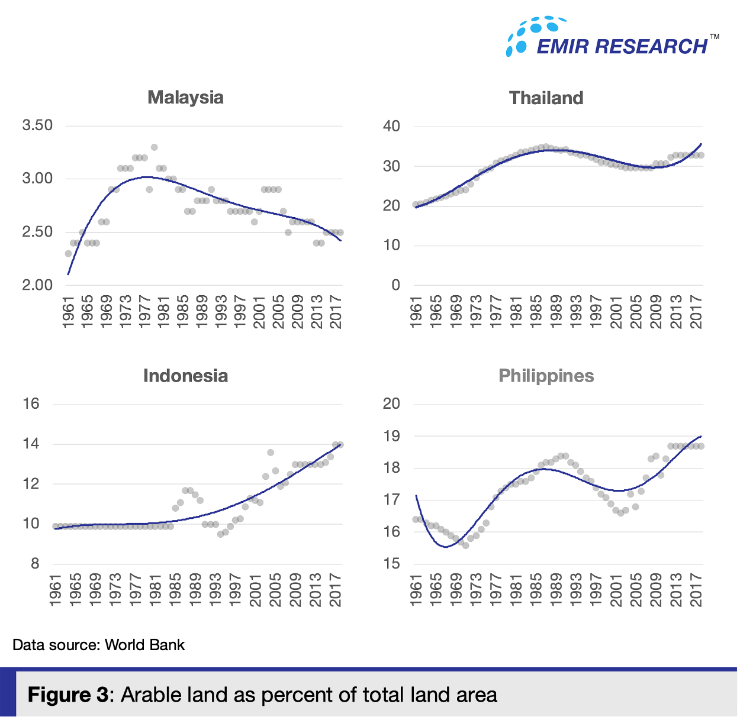 Therefore, when trade routes were halted at the start of the Covid-19 pandemic, Malaysia had to resort to knocking on the doors of other nations to push for rice imports.

Reports indicate that the production of rice in Malaysia is not as cost-efficient as in neighbouring countries such as Thailand. Researchers from Universiti Utara Malaysia noted that this could be due to lower international market pricing for rice being below Malaysia’s average production cost. This explains why rice and paddy is a heavily subsidised industry.

Despite this, and especially for higher-end/exotic rice varieties, it could be cheaper to import. In short, our paddy industry is not competitive.

Thus, approaching self-sufficiency from the national security perspective must transcend purely economic reasons – we would not be able to eat cash, or drink oil palm during times of crisis.

Furthermore, investing heavily in national technology-infused agriculture or AgriTech is an excellent market proposition for Malaysia with a captive market of more than 32 million people and never-ending demand.

Not by chance, the world’s most renowned sovereign wealth funds such as the Government Pension Fund of Norway, Temasek, and Kuwait Investment Authority invest heavily not only in their local AgriTech initiatives but in similar initiatives worldwide.

These savvy investors know that apart from a captive market AgriTech means efficiency and reduced risks with simultaneously increased yields. Yes, AgriTech is capital intensive, but it pays off.

The recent chicken supply shortage is a good example to show that even high SSL does not guarantee food availability. There are many elements beyond what is calculated for SSL that make the question of local production capacity, imports, exports, and storage capacities (stockpile) to be insufficient parameters to consider when it comes to food security.

Malaysia’s chicken SSL is 113.5% according to DOSM based on 2020 data, but still, recently we faced a supply issue due to a combination of the following reasons:

3. Potential withholding of supply from big players acting as a cartel to boycott government measures

It is also questionable how the stockpiling strategy for chicken would be successful given reports that existing storage capacities for fish failed to be utilised, resulting in similar shortage issues. The structural and governance issues still underline policy implementation weaknesses.

To be specific, SSL is only an element under one dimension (“Availability”) of food security, which is a multi-dimensional issue. We can see this in the definitions outlined by both GFSI and The Food and Agriculture Organisation of the United Nations (FAO) (Figure 4). Past policies have not put focus on other crucial food security aspects, which would explain Malaysia’s poor score in environmental sustainability (long-term supply of limited natural resources and resilience against climate change, while structural and governance issues disrupt supply chain efficiency (minimisation of food loss) and jeopardise food safety, quality and nutrition.

The premise of national security is to assume the possibility of all scenarios and prepare accordingly. Therefore, we cannot take the climate, our natural resources, the weather and disaster risk profiles for granted.

Climate change and natural resource resilience remind us of another key weakness observed from past and even current policy — water and energy “nexus”. These dimensions appear to be missing or at least, inadequately emphasised, despite being inseparable and crucial elements in the food security equation.

At present, Malaysia’s ability to produce food through its agriculture sector is facing severe risk given that 70 per cent of the water resources in the country are for the agricultural industry, according to researchers.

In addition to water security and water resource management, natural resources resilience calls for the internalisation and practice of a circular economy across all sectors. The emphasis on technology use further heightens the importance of energy security in the agrofood sector.

Malaysia has been blessed to be spared from many natural disasters compared to neighbouring countries, but climate change may shift weather patterns and no one can guarantee that the natural disaster risk profile wouldn’t change.

In general, the NAP 2.0 is much more comprehensive than its predecessor. For example, the policy makes clear emphasis on modernisation and use of technology, nutrition, sustainability, youth participation, improvement of SSL of major food items, and alignment with other national policies.

However, we are concerned that such ambitious targets would require a level of excellence in implementation not seen even with less comprehensive past policies.

The stronger emphasis on technology use requires a higher level of talent (a problem given Malaysia’s serious brain drain phenomenon) and requires higher budgetary allocations (with better management) so that Malaysia’s spending intensity as a percentage of GDP can be improved.

Another important gap in actual self-sufficiency, at least for critical food items, is the localisation of supply chains. This means the SSL of the inputs as a key measurement of self-sufficiency beyond the standard SSL calculation for the food items themselves.

EMIR Research considers all these potential gaps in supplementing the current policy with its own national food security strategy, as a priority national security agenda.

(Dr. Rais Hussin and Ameen Kamal are part of the research team at EMIR Research, an independent think tank focused on strategic policy recommendations based on rigorous research.)

Dangerous to rely on imports for food supply
4 d ago RM meltdown: preparing for the worst
7 d ago PAS politics: Sleeping with all strategy
1 w ago Becoming the citadel of corruption, paving the way to a failed state
2 w ago The history of Kelantan Chinese: a retired couple spends 15 years compiling the records of Chinese migration
1 d ago Rethinking Rukun Islam in a nation-building construct
1 d ago