His Majesty is well aware of the country’s problems and has in fact put forward a solution. What happens next will very much depend on the efforts of our new prime minister Datuk Seri Anwar Ibrahim.

The journey for Datuk Seri Anwar Ibrahim to become the 10th Prime Minister of Malaysia is one that is full of thrills and risks.

When he was once again having a near brush with the prime minister’s post, Ahmad Zahid was there giving him a hand, putting him back on the race track, despite the mounting pressure on the Umno president against doing so.

Eventually it was the farsightedness of His Majesty Yang di-Pertuan Agong that paved the way for the new PM.

On the second day after the election, Muhyiddin Yassin was flushed with confidence, as he prepared to ascend to the premiership once again with the statutory declarations signed by 115 incoming MPs in his hand.

Of the 115 SDs, ten were from pro-Hisham BN reps. That also explains why Hishammuddin couldn’t wait to proclaim his support for a PN-led government.

“I won’t change my decision even if I get sacked,” he vowed.

After Ahmad Zahid discovered this, he pressured these MPs to retract their SDs in support of Muhyiddin. Without the nod of the BN chairman, the legitimacy of such SDs becomes questionable.

During his audience with the King, Muhyiddin claimed that he had the support of 115 MPs, but that was not acceptable to His Majesty. As a matter of fact, after the ten BN reps withdrew their support for him, he was left with only 105, still shy of the 112-seat threshold.

BN was initially more inclined to support a new government led by PN, especially the party’s bigwigs such as Ismail Sabri and Hishammuddin. Meanwhile, GPS of Sarawak also openly proclaimed its support for Muhyiddin, putting the PN chairman well ahead in the race.

But, the meeting at Seri Pacific KL turned the tide around in Anwar’s race towards Putrajaya.

Zahid masterminded the Seri Pacific meeting between BN reps and Anwar, giving both sides a historical opportunity to meet and talk. This has effectively softened their animosity towards their erstwhile arch rival.

BN’s stance saw a dramatic shift after the “Pacific Move,” as it abandoned PN and decided not to side any camp and were prepared to be in the opposition.

This could be seen as an expedient solution for BN. By not joining PN, it would save itself from being engulfed by Bersatu and PAS, and by not working with PH, it would fulfill the pledge it made to the party and the Malay society. 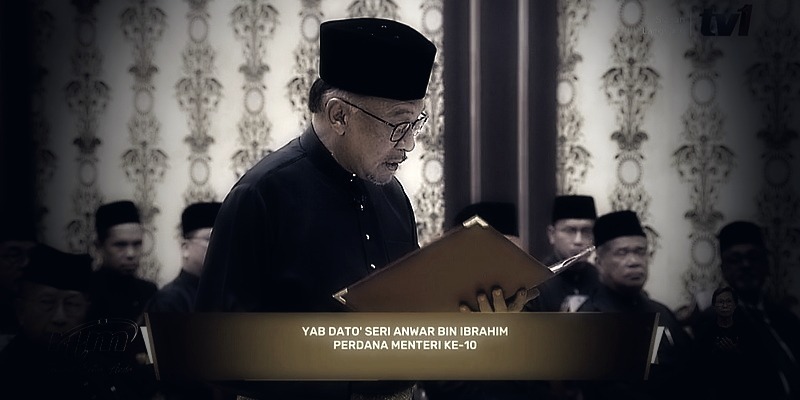 But, such a position would not help dissolve the deadlock. If BN was determined to stay neutral, no coalition would be able to cross the threshold, and we wouldn’t have had a government.

The King also made his attitude very clear that he wanted BN to join a unity government.

Muhyiddin turned down the King’s proposal of a unity government, thus putting himself at a disadvantage with the royalty, while Anwar accepted the proposal.

His Majesty proposed to set up a stable unity government that could reflect the country’s pluralistic ethnic and religious fabric. This put Anwar’s more inclusive line-up a notch above Muhyiddin’s in meeting the King’s aspirations.

PH is itself a coalition of multiracial parties, if BN that represents the Malay society and GPS that represents Sarawakians would join in, the new government would basically conform to a principal condition set by the King.

Up till this point, Anwar’s prospects began to look pretty good, and the Umno supreme council meeting that lasted from Wednesday night till early Thursday morning sealed his success.

In that meeting, Umno leaders compared the conditions offered by PH and PN. Among PH’s offers included a DPM post for Umno, with key cabinet positions jointly decided by the PM and DPM, as well as BN helming the Perak and Pahang state administrations. Such lucrative offers were happily accepted by the Umno supreme council.

The next morning, DAP’s sec-gen Anthony Loke flew into Kuching to meet Sarawak premier Abang Johari, and offered his apology on behalf of his party for any statement previously made by any DAP leader that could have offended the state government or the people of Sarawak. This was very soon followed by a public apology by Lim Guan Eng on Facebook.

DAP’s apology has not only removed the obstacle that stands in the way of PH and GPS, but has also bridged the two sides, paving the way for GPS to join Anwar’s unity government.

The first thing Anwar Ibrahim gets to do after he has been sworn in as the nation’s 10th prime minister, is to put up a new government

BN’s decision to join the unity government, coupled with GPS and GRS accepting the King’s proposal, Anwar has now earned the cooperation of BN, GPS and GRS with the support of over 140 MPs, clearing the last hurdle for him to set up a functioning government.

As for the distribution of ministerial positions, let’s give the new PM some time to negotiate with the various parties.

What is left now is PN’s Bersatu and PAS. Will they join the unity government? Or will they remain in the opposition?

PN supreme council’s latest decision is to agree to consider the unity government proposed by the King, but does this U-turn come a little too late?

What conditions will PN put forward? Will Anwar accept PN in his new government?

If PN joins the unity government, Malaysia will be left with zero opposition, which could set a precedent in modern democracy. If PN opts out, it can make a powerful opposition party.

Political divisions, vicious political struggles, racial and religious divisions as well as inefficient governance have eaten into the country’s stability and global competitiveness.

To put the country back on the track of growth, a unity government has to be brought into being within the shortest time possible which will help melt the ill-feelings between parties and bring Malaysians from different ethnic and religious backgrounds together so that the new government can take the country forward in full force.

His Majesty is well aware of the country’s problems and has in fact put forward a solution. What happens next will very much depend on the efforts of our new prime minister Datuk Seri Anwar Ibrahim.

Anwar opens a new chapter in Malaysian politics
2 d ago