The year 2021 kicked off with our King the Yang di-Pertuan Agong declaring on January 12 a state of emergency nationwide due to the rising numbers of COVID-19 cases, with hospitals 90% full with COVID-19 patients.

The rest of the first quarter of the year had these to offer; February 2 brought joy when our squash queen Nicol David was named the Greatest Athlete of All Time, whilst floods wreaked havoc in Maran, Pahang. Kuantan was declared city status on February 21, and the COVID-19 vaccine arrived in Malaysia on February 27. The next month saw the High Court announcing the ruling on March 10 that the word “Allah” could be used by non-Muslims.

The second quarter was less pleasant: A nationwide ban on inter-district and interstate travel throughout Malaysia was announced on May 10, followed by the reintroduction of nationwide MCO two days later. Malaysia enforced a ban on travelers from Pakistan, Bangladesh, Sri Lanka and Nepal commencing May 17 due to the increasing numbers of COVID-19 victims. May 24 presented further catastrophe with the collision of two LRT trains near KLCC, followed by the announcement on May 28 of a total lockdown imposed on all social and economic sectors for 14 days commencing June 1. However, June 11 marked the extension of this lockdown for another two weeks. On June 16, the Yang di-Pertuan Agong decreed that Parliament should reconvene as soon as possible. June 27 brought further setbacks to the country with the lockdown extended indefinitely until the number of cases dropped to 4,000.

Kicking off the third quarter of 2021, July 7 saw Datuk Seri Ismail Sabri being instated as deputy prime minister. July 23 marked the Malaysian athletes’ participation in the Olympic Games. On July 29, the Yang di-Pertuan Agong issued a rebuke on the revocation of the state of emergency. July 31 marked a date to remember – while our shuttlers Aaron Chia and Soh Wooi Yik clenched the bronze medal for badminton men’s doubles in the Olympics, the rest of the rakyat assembled in Kuala Lumpur in a protest demanding Muhyiddin Yassin’s resignation as prime minister. August 1 ended the state of emergency in all states except Sarawak. On August 8, while “Pocket Rocketman” Azizulhasni Awang bagged the silver medal in the cycling event at the Olympics Games, Umno withdrew its support for the then PM Muhyiddin. On August 16, Muhyiddin and his cabinet resigned, and he would remain as caretaker PM. On Aug 20, the Conference of Rulers announced Ismail Sabri as the 9th prime minister of Malaysia, with his swearing-in taking place the next day. The new cabinet was formed on August 27; simultaneously Bonnie Bunyau Gustin won the gold medal the for 72kg powerlifting in the Paralympics Games on the same day, followed by Jong Yee Khie winning a silver medal for the 107kg powerlifting event three days later. Malaysia brought home three gold medals and two silver medals from the Paralympic Games on September 5. An MOU was signed on September 12 between the opposition and government on bipartisan cooperation and reforms.

The final quarter of 2021 saw a Malaysian being appointed as the first urology professor at Cambridge on October 20. A month later, on November 20, the Melaka state election took place with Barisan Nasional retaining control with 21 seats.

The 2021 centerstage was the COVID-19 lockdowns and our debilitating political fracas. These two events dominated our nation and almost every Malaysian from Kedah to Johor and Sabah, Sarawak.

With most Malaysians frozen and deeply affected by the lockdowns and never-ending political drama, international events like the Summer Olympics and Paralympic Games were overshadowed by the fiasco.

We were literally dependent on one man, our King, to find solutions for the never-ending political tsunami. Politicians were guarding their own well-being, robbing us of peace of mind and stability. Investors ceased investing; our stock market began cringing and our currency began falling.

White flags were held up; online and traditional media were inundated with people struggling and begging for food. Every corner was filled with conditions of misery and pain among the rakyat, wondering when we would overcome these challenges. Those who were able offered aid to those in need, mainly in the supply of food.

Businesses and trade plunged, jobs lost, unemployment market peaked; and with it the suicide rate too, with an average of two people taking their own lives per day.

An assuring point was that Malaysians remained sober, calm and patient during the pandemic lockdowns and political fiasco.

My encounters with Grab and small traders were simply painful and tear jerking. Many of the B40 groups in urban areas were badly affected with many struggling to put a decent meal on the table.

Our first prime minister Tunku Abdul Rahman once quipped, “I am very proud that no Malaysian has died of hunger in our country.” I wonder how far and true this statement holds today.

November welcomed more turmoil amidst the lockdown and political jostling. Malaysians were shocked with the recent lop-sided tabling of the budget, a far cry from the initiative of building a “Malaysian Family” or “Keluarga Malaysia” as espoused by the current PM.

We need a holistic budget, not one that blindly favors any particular race. The current government should make more effort to bridge this huge gap between the Malays and non-Malays.

December was devastating with the floods resulting in several deaths. I am not an authority in flood mitigation, but from a crisis communication perspective, we have failed. It’s sad, the Selangor state was seen as “step-child” in this issue. Comments like “luckily only a few deaths”, “due to a beer factory, we endured flood” , “is the Sikh food halal?” were rubbing salt to the wound. But again, Malaysians rose to the event and went on assisting one another without much government support.

This is truly stellar performance of Malaysians who stood beyond race, religion or position. We have done it!

My wish for 2022 is to see a nation that truly wants progress not only in terms of economic front, but also from the social and political points, too.

The voters have voted in Melaka and Sarawak. Though both states have very different settings, Malaysians cannot be taken for granted. Melaka also has taught the political masters that the voters will swing or sway if you fail.

Likewise, the current government should make amends and work on building a stronger nation.

Let’s drop the race and religion cards from the equation. I am not saying that the Bumiputras are not to be taken care of, but likewise the other races too deserve equality and not favoritism for one specific race.

There are many who are poor, sick and handicapped in all races. We need policies and programs for all. The Indians, Chinese, Ibans, Kadazans, Muruts and any other ethnicities must be included in every program to build and repair the existing holes in the system.

Build a Malaysia that encompasses all. Our race relations activities must be stepped up. Erase any program that builds hatred or distrust.

Let’s focus on streamlining the education sector. Discard religious elements. Keep it purely with English (of course not forgetting our Bahasa Melayu), Mathematics, Science and new areas like Robotics and Artificial Intelligence (AI) and Automation. Bring in Human Values studies for all.

We need Malaysians who can meet the growing needs of automation that is going to dominate the employment sector with 51% of job activities worldwide.

We cannot have only students graduating in religious studies and arts degrees. We must think of this very seriously.

We need a society with high integrity. We cannot succumb to people who claim to pray regularly but fall for illicit income via corruption.

Such actions bring more damage to our country than any other crimes.

We are tired of campaigns and advertisements. We want enforcement and education in this area.

Poverty is no more only in rural areas, but also in the urban parts of our community. All urban areas with the People’s Housing Project public flats must be reviewed in terms of their sizes, facilities and recreational activities. This must be done nationwide.

All the two-room flats must be converted to or replaced with three-room units; increase the number of parking lots, add more community halls, refurbish old elevators, enhance the lighting and improve the waste management systems.

Ensure that for every 100 families there is an adequate gym, playground and library and better internet facilities.

Build more Police Beats around the flats to ensure there is greater control of youth misbehavior around the area.

Build more Light Rail Transit (LRT) or Mass Rapid Transit (MRT) lines not only in Kuala Lumpur but also all other major cities throughout the country. Allocate more funds for this project and make sure they are all inter-connected.

We must not only increase mobility but also reduce CO2 oozing out of our fossil fuel powered cars.

The Small and Medium Enterprises contribute 40% to our GDP. Bring in more incentives and programs for them to further grow as local brands. Allocate more funds for marketing, public relations and branding, thus producing more names such as Secret Recipe, AirAsia, Padini, Anakku, Bonia, Munchy, Giant, Jimmy Choo and Shangri-La, besides our GLC’s such as Petronas, Maybank and CIMB.

The agricultural sector is not just producing palm oil and rubber. Encourage more Malaysians to plant vegetables, fruits and short-term crops. The government and private sector should allocate empty plots of land for such activities to be carried out. Let’s utilize these lands and reduce our RM52 billion deficits on importing food for Malaysians.

The local authorities have a big role to play. Let them be the “touch points of development” for every meter of land in our country.

The local authorities are adapting a lackadaisical attitude towards the needs of the people and nation. They need strict monitoring and scrutiny on their roles and responsibilities in building a greater Malaysia. For example, Klang is an aggressive town with three ports at the fringes of this coastal area. However, its condition is shameful. Dirty eateries, poorly maintained roads, unkept drains, polluted rivers especially Sungai Aur, causing floods in what happens to be the royal town.

Klang has been neglected not just because of the laid-back people, but also the collectible failure of the local authority and elected members of parliament, state assemblymen and appointed councilors.

My final point is human capital development. We must focus on this starting from school. We cannot do this by one agency called HRDF alone. We need a concerted effort from primary and secondary schools, and universities. These three institutions of learning must build leaders and not bigots or Malaysians who focus only on religious values.

We need Malaysians with universal values, analytical skills and leadership acumen to face the volatile, uncertain, complex and ambiguous world.

They must be drilled from young to face the realities of tomorrow rather than just thinking of the “after world”.

Let’s think differently this 2022, bringing Malaysia to a greater height in a holistic manner. 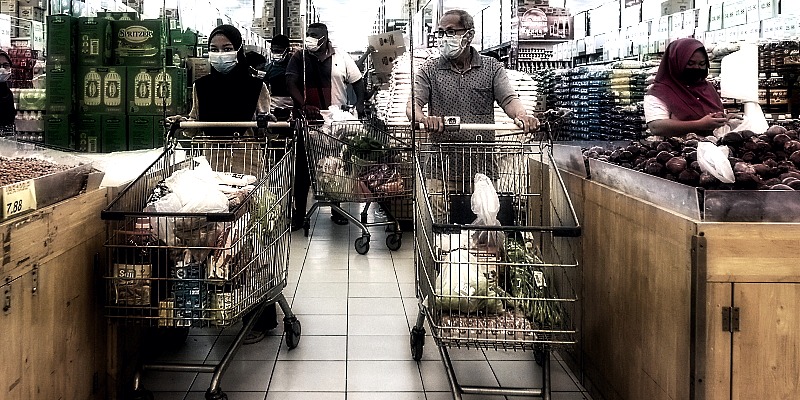 Task force on inflation: can we really count on you?
3 h ago