The recent case of a mother deprived of custody of her children due to the religious issue of conversion mirrors the same fate that befell Madam Indira who had almost the same predicament for more than a decade.

From these cases, there are several perspectives about Islam, both from Muslims and non-Muslims, that I can read.

From the perspective of the non-Muslims, Islam comes off as a cold and cruel religion without any shred of compassion that ‘encourages’ the separation of the mother from her children, especially if the mother is a non-Muslim.

From the Muslim perspective, it is a narrative of ‘protecting’ Muslims from being reconverted back to a religion other than Islam.

The Muslims do not seem to care two cents about motherhood or compassion but the simple idea of defending Islam and Muslim children from the non-Muslim’s clutches of their various religions.

This issue is just one of many race and religious conflicts that are dividing this nation right down the middle.

In this article, I do not wish to get involved in what I consider a senseless debate about child conversion to another religion or whether the federal law is greater or less important than state laws in religious matters. Nor do I want to get caught up in another senseless argument on whether a child is a grown up at 14 years of age or 18 years.

Malaysia and Malaysians are lost in these kinds of battles at the simple expense of a mother’s love and a child’s need.

The humanity of the issue seems to be worthless in the Malaysian war of laws and legal jargon.

In this article, I would like to remind Muslims and explain to non-Muslims the special place of mothers, regardless of their faiths, in the eyes of Islam.

I hope to remind Muslims that when it comes to matters of the best things for children and the best thing for mothers, it is simply the compassion that has been acknowledged by none other than the Prophet Muhammad himself.

I would like to explain to non-Muslims that for me, Islam is a humanistic and a compassionate religion but the political, cultural and social interpretations of it has overwhelmed the simple, basic and universal teachings of the religion.

In the Qur’an, Allah the Most Merciful has reminded man as to their responsibility and compassion towards both parents as in the following verse:

“Your Lord has decreed that you worship none but Him and that you be kind to parents. Whether one or both of them attain old age in your life, say not to them a word of contempt, nor repel them, but address them in terms of honor. And out of kindness, lower to them the wing of humility and say, ‘My Lord! Bestow on them Your Mercy even as they cherished me in childhood.’” (Quran 17:23-24)

The Prophet Muhammad, in a most authentic hadith, had singled out the mother over the father when a Muslim man asked him about the duties of the son to the parents:

Note that the Prophet said ‘mother’ three times before the word ‘father’! This indicates that Islam places a special place for mothers both in this world and the next.

The mother bears the children and nurture them in the early years with both love and hardship.

Another famous hadith is about the responsibility of the children to the mother regardless of her religious faith and belief.

Muslims are taught that when one converts to Islam and leave the religion of one’s parents, this does not mean that one foregoes the responsibility of taking care of them and speaking kindly towards and with them.

Narrated by Asma bint Abu Bakr that: “During the treaty of Hudaibiyah, her mother, who was then pagan came to see her from Makah. Asma informed the Messenger of Allah Prophet (PBUH) of her arrival and also that she needed help. He (SAW) said: Be good to your mother.” (Muslim)

Finally, the greatest ‘jihad’ that one can perform is not just dying in the field of battle defending the faith of Islam, but it is also the case by taking care of one’s mother, if there were no one else to do so.

‘A man came to Allah’s Messenger (SAW) and said: “O Messenger of Allah! I want to go out and fight (in Jihad) and I have come to ask your advice.” He (PBUH) said: “Do you have a mother?” He said: “Yes.” Prophet (PBUH) said: “Then stay with her, for Paradise is beneath her feet.” (Sunan Nisai)’

Thus, it is clear that Islam places a special place for mothers in the religion.

I am most sad that some Muslims deny this compassionate position of Islam in the name of ‘protecting Islam’ or making sure that the population of Muslims do not decrease.

Such an administrative and a political narrative of Islam will cause undue pain to both children and mothers as well as paint Islam as a religion without compassion and furthest from humanity.

My understanding of Islam comes from understanding the values and compassion of the Prophet Muhammad but unfortunately, most Muslims learn Islam from a historical, political and cultural narratives of Islam as ‘if you are not with Islam then you are the enemy’.

This kind of narrative will soon destroy this nation of Malaysia as well as the religion itself due to its preference for the letter of the law and not the spirit of the teachings. A Merdeka without maruah
6 d ago 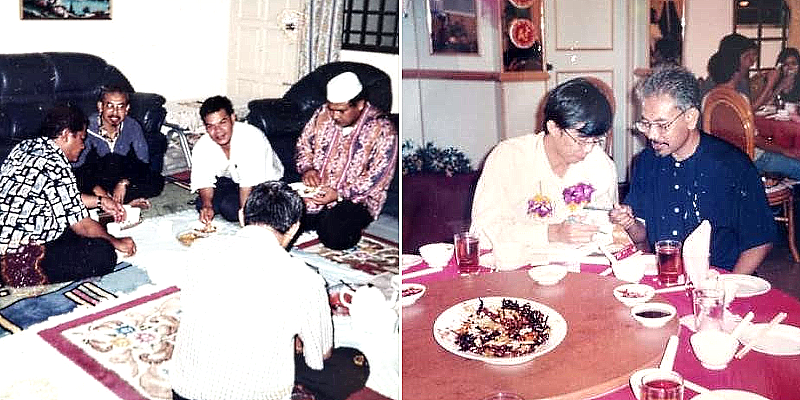 Days of Reformasi
4 w ago Where are the Islamic scholars and moderate reformists in Malaysia?
2 mth ago
Read More