There is some belief that the so-called deep state is responsible for many predetermined acts in Malaysia.

Some believe that the abduction and disappearance of Amri Che Mat and Pastor Raymond Koh were acts undertaken by elements within the deep state.

Likewise, the acquittal of Ahmad Zahid Hamidi of corruption charges, Abdul Azeez being granted a discharge not amounting to an acquittal, and Bung Moktar and his wife given a stay from entering a defense on charges of criminal breach of trust (CBT), all on the same day raised conjecture deep state forces were at play.

There is a belief that the deep state is a united homogeneous entity which influences the running of government and policy decisions, with some unity of purpose.

Nothing could be further from the truth.

Traditionally the deep state is defined as a secret or hidden group and networks of groups able to yield power and influence upon a country’s political leadership in pursuit of a clandestine agenda.

The deep state is sometimes referred to as a shadow government, inferring some form of purposeful agenda of interest to the group.

In Malaysia, the components of the deep state are generally believed to consist of the monarchy, elite Malay establishment, the Special Branch, the civil service and the Islamists.

It is assumed their agenda is a coherent and consistent one, pursuing clear ideological objectives, Ketuanan Melayu or Malay supremacy being the underlining mission.

However, this is only an espoused mission where elements within the deep state often pursue conflicting and competing objectives, sometimes blocking or sabotaging other components of the deep state.

Thus, the deep state is often in conflict, in a state of flux, self-destructive, and transformative into mostly weak and short-term alliances.

Within these groupings, groups and sub-groups pursue their own agendas and ideologies independently.

From this perspective, the concept of Malay unity within the clandestine institutions at the pinnacle of Malay society is not much more than mythology.

This can be clearly seen in the current struggles going on within the Malay political elite.

Through the political paradigm, all these struggles and sanctions against Najib Razak all fall into the Malay Machiavellian struggle for power and savage retribution against foes.

Such struggles have been witnessed for generations within Malay politics.

The May 13 riots can be seen as the catalyst that allowed the engineering of a coup against the then sitting prime minister Tunku Abdul Rahman by young ultraconservative Umno members led by Mahathir Mohamed.

The February 2020 Sheraton Putsch when Mahathir resigned his commission as prime minister leading to the fall of the Pakatan Harapan government, allowing for the formation of a Malay-centric government, is a brutal exhibition of competition within the Malay elite for the trappings of power.

In 2010, a palace feud where the ailing sultan of Kelantan was deposed by his eldest son, utilizing house arrest and road police block tactics in the struggle, gave some public exposure of the divisions and feuds within the royal families.

Division by the royal families is a major factor preventing Najib from receiving any possible pardon and release from prison.

Civil servants within agencies and ministries often block or sabotage their ministers, neutralizing their ability to implement policy.

Civil servants see their own internal agendas as being more important than their minister’s policy plans.

Chief ministers often find heavy pushback from their own state civil servants when they attempt to push through their policies.

One civil servant told the author they would simply ignore their chief minister’s directions unless he repeatedly made the same request.

The civil service has enormous power over both policy and implementation that is rarely seen by the public. The extent of this power was only seen during the Covid-19 pandemic where the Director General of the Ministry of Health Noor Hisham Abdullah took direct control over pandemic response decision-making.

The Islamic Development Department (JAKIM) is often criticized for overreach on Islamic issues.

Within JAKIM itself, there are power struggles going on. A group of corrupt civil servants are vying for control of the organization while groups aligned with the Salafi and Muslim Brotherhood movements are engaged in a struggle for influence within JAKIM.

Officially, JAKIM is under the control of the Council of Rulers. However, in reality it is supposedly under daily control of the Minister for Religious Issues in the Prime Minister’s Department Idris Ahmad.

A group referred to as the Alumni has many of its members scattered around JAKIM’s hierarchy, influencing its day-to-day operations and internal policy direction.

JAKIM as a department within the Malaysian bureaucracy is in the frontline in the fight for control by rival groups.

The so-called deep state a contentious grouping of people and institutions in competition. One part of this “secret” bureaucracy is not aware of what other parts are doing.

When talking about the deep state, one must understand its complexity and decentralization.

Consequently, there is no uniform or clandestine central secret agenda prevailing. One should rather look at the deep state as a field of competition for power and influence over sections of Malaysian government and society.

This is not to say that the deep state doesn’t hold a prominent position of influence in society, influencing much of what happens.

This is an area that requires much more study to understand who really holds the power within Malaysia. What we need to do in public health
4 w ago Government must focus on rural heartland, not Industry 4.0
1 mth ago The real story of Pejuang: Tales of treachery and deceit
1 mth ago 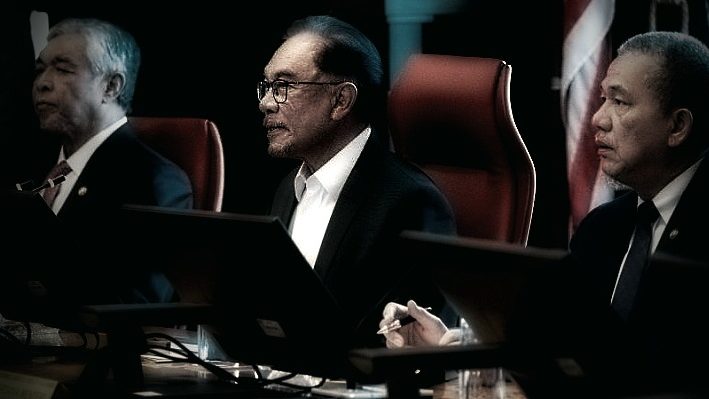 What’s in store for Malaysia in 2023: the major challenges ahead
1 mth ago Messaging or action: which is vital?
7 h ago

Khairy to move political focus to Selangor
11 h ago